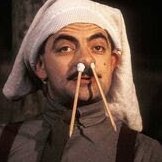 By Properjob56,
August 6 in Aircraft WWII