All moving tailplane on the Supermarine Scimitar F.1 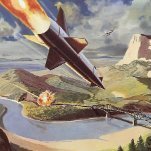