Is this the first V-tail in the GB? Hartmann on the Eastern Front, summer 1943... 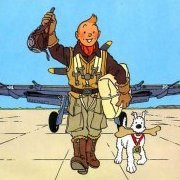