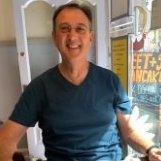 By Tony Davis,
February 1 in WWI