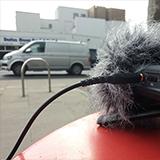 By LFXcess, April 18 in Armour Chat