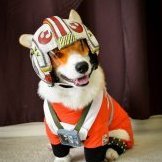 Question to the community about books:

By WelshZeCorgi, February 28 in Magazines & Books