A Mustang and a Thunderbolt 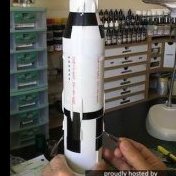 By Blackmike,
February 22, 2020 in Ready for Inspection - Aircraft